The Friends of NCHS Executive Committee praises appropriations leaders for their support of more timely, frequent, and relevant statistics to improve our country’s health and healthcare. We are especially grateful to Representative DeLauro, Senator Murray, Representative Cole, and Senator Blunt, as well as Representatives Castor, Fitzpatrick, and Brown for leading the dear colleague letter in support of NCHS. The $187.4 million in budget authority for NCHS in the FY23 Omnibus Appropriation Bill will help to modernize existing data collection systems, allow the agency to provide more timely and granular data, and reaffirm NCHS’s status as the world’s gold-standard producer of health statistics.

Federal Statistical Agencies see budget increase of 7.8% in FY23 Omnibus Appropriations Bill
Ten of the thirteen federal statistical agencies (3 agencies do not have line items within the bill) in the FY23 Omnibus Appropriations Bill had an average increase of 7.8% in their annual budget. The table below shows the FY22 budget figure along with the amount contained within the bill. Thanks to Steve Pierson at the American Statistical Association for compiling these figures and publishing them online. 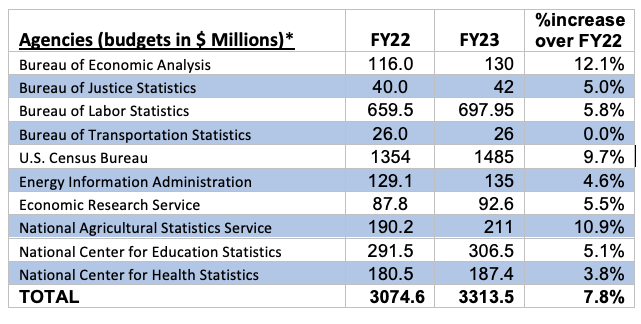 SAVE THE DATE!
The 2023 FCSM Research and Policy Conference will be held October 24-26, 2023 at the University of Maryland Conference Center in College Park, MD.

There were 26 federal register notices posted by federal statistical agencies from November 26, 2022 to December 25, 2022. Links to each of these notices are organized by agency below.

FedStats In the News