OMB recently shared a copy of this year’s Analytical Perspectives chapter called “Leveraging Federal Statistics to Strengthen Evidence-based Decision-making.” This chapter, which formerly was named “Strengthening Federal Statistics,” is back in the Analytical Perspectives volume this year, which was published alongside the FY 2023 President’s Budget today. The chapter is available online at: https://www.whitehouse.gov/wp-content/uploads/2022/03/ap_15_statistics_fy2023.pdf

The Bureau of Labor Statistics invites you to participate in a survey to help shape a possible new National Longitudinal Surveys of Youth (NLSY) cohort. The NLSY are a set of surveys designed to gather information about people over time on their labor market experiences and other significant life events. BLS is currently in the process of gathering input regarding a potential new cohort which could begin in 2026. Therefore, they are seeking feedback on this and improvements to the ongoing cohorts, the NLSY79 and NLSY97. This survey is an exciting chance to share your thoughts on content, survey methodology, and dissemination of these important surveys.

Participation in this survey is voluntary. If you decide to participate, the survey will take you approximately 20 minutes to complete. Please note that this survey is being administered by Qualtrics.com and resides on a server outside of the Bureau of Labor Statistics (BLS) domain. The BLS cannot guarantee the protection of survey responses and advises against the inclusion of personally-identifiable information—such as your full name, phone number, e-mail address, etc.—in any response.

The Call for Papers was recently sent out for the 2022 FCSM Research & Policy Conference which will take place October 25-27 at the Washington Convention Center. This year’s theme is “Great Expectations: New Directions and Innovations for Sustainable Federal Statistics.” For more information or to submit an abstract please visit https://fcsm2022.org/

COPAFS Quarterly Meeting: June 3
COPAFS will hold its next Quarterly Meeting on Friday, June 3, 2022. The meeting will be virtual and will feature the heads of the federal statistical agencies.

Call For Papers: 2022 FCSM Research and Policy Conference: October 25-27, 2022
The 2022 FCSM Research and Policy Conference has been scheduled for October 25-27, 2022. FCSM is now accepting abstracts for the conference. The submission deadline is May 16. The conference is being planned as an in-person event at the Washington Convention Center. For more information, click here. 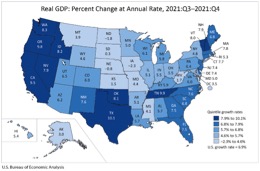 There were 22 federal register notices posted by federal statistical agencies from February 26, 2022 to March 25, 2022. Links to each of these notices are organized by agency below.