Recent Polling on Perceptions of the 2020 US Census

From:  Quadrant Strategies, on behalf of Article 1

Re:  Recent polling on perceptions of the 2020 US Census, with a particular focus on counting children

Over the past month we conducted an online survey across the US with several different audiences. The purpose of this survey was to understand how key audiences feel about the 2020 Census, identify what message themes are resonating and why, and pinpoint which people and/or organizations are the most effective messengers to communicate these themes.

For the purposes of this memo, we will focus on respondents who have children in order to understand people’s knowledge of and intent to count children in the 2020 Census. This sample examines 768 members of the general population, including 194 English-Speaking Latinos, 238 Spanish-Speaking Latinos, 359 Muslim Americans, 160 African Americans, 101 Asian Americans, and 288 Young Adults that have children and/or babies in their household. The margin of error for the general population is +/-3.54%, and it’s higher for the different subgroups.

Misinformation and a lack of knowledge are standing in the way of everyone being counted in the 2020 Census ‒ especially when it comes to young children.

In addition, there’s a particular risk that children will not get counted in Young Adult and African American households. A significant portion of these audiences don’t know whether the Census counts all children in the household.

Note: We didn’t test messaging focused on children in this survey. In future studies, it may be worth testing which messaging is most effective in educating people that they should count children, especially younger children and babies.

Most people say they’re familiar with the Census, but when we look at how much audiences actually know, we see a lot of misinformation — especially about counting children in the Census. While most people who have children know they should count them, 1 in 3 either don’t know or are misinformed.

To the best of your knowledge, please indicate whether you think each of the statements applies to the 2020

Census: “The Census counts all children and/or babies that live and sleep in the household most of the time,

regardless of relationship, split time, or temporary status”

Showing % among people who have children in their household

Note: Estimates reported in this chart were rounded to whole numbers so the sum of estimates equals 100%

If you were filling out the 2020 Census form for your household (people living in your home), who would you include?

Showing % “Adults, children and/or babies, not including extended family” among those who have children in their household

INTEREST IN LEARNING ABOUT CENSUS

Based on what you know now, how interested are you in learning more about the US Census?

Showing % across audiences who have children in their household

Note: Estimates reported in this chart were rounded to whole numbers so the sum of estimates equals 100% 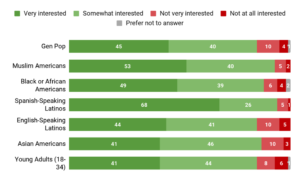 SOURCES FOR THOSE FAMILIAR

Which of the following, if any, have you used to get your information on the Census? Select all that apply.

Showing % among Gen Pop who have children in their household

Sign up to receive our Friends of COPAFS Updates